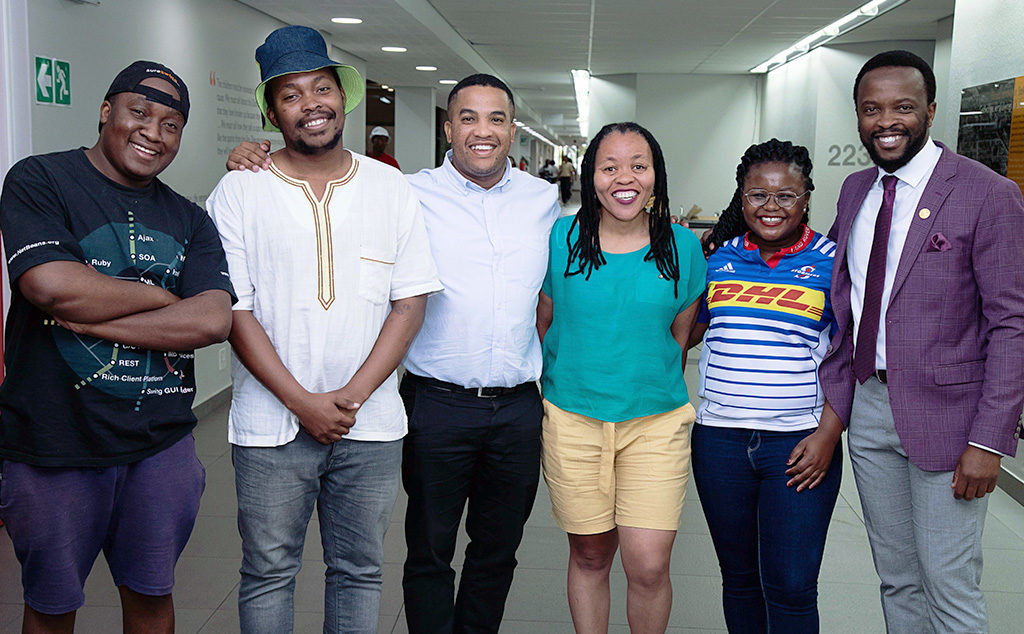 “I dared. I had nothing to lose. I gave myself a chance. Here where you are sitting now, you are sitting on a no, but you can also be put in a different position to where you are now if you dare to ask. It’s only because I dared,” said Law Faculty alumnus, SAFM radio presenter and qualified lawyer Songezo Mabece as he addressed more than 400 students at a recent Careers Café held at Stellenbosch University (SU).

This was the main tip that Mabece shared from his Top 5 Tips with the students on how to build a successful career.

Mabece was the second alumnus to participate in the annual Careers Café series. The TedTalk-styled talk series was launched in 2016 by the Alumni Relations division to provide a platform for alumni to engage with the university in a different manner by offering their time and skills to help current students prepare for the careers they want. At the same time, undergraduate and postgraduate students are exposed to a diverse group of alumni who have pursued different careers and faced various challenges along the way to build a successful career.

Mabece, who grew up in Sada, a rural community in the Eastern Cape, today works as Legal Counsel and Executive Assistant to the Commissioner of the Competition Commission of South Africa.

Speaking to the students, he shared how his journey started when he was just eight years old and enrolled at Selborne Primary School after having secured a spot at the boarding school. Upon acceptance as a learner, Mabece would be one of only eight black learners to live in the school hostel along with 60 white learners. Two of the eight African learners also happened to be his brothers.

“For the next 11 years my life was governed by the clock,” said Mabece as he shared the challenges of moving into a school hostel at the age of eight and having to adjust to a world filled with immense privilege, something he was now being exposed to as a young African learner amongst thousands of white learners at Selborne Primary.

It was 1992, De Klerk was still president and apartheid was in its dying days, but still giving its last final kicks.

“If you were at a Model C school, you were expected to be like everyone else. In 1992 that was your only option. It was deplorable to be Mabece, I was called Sangezo instead of Songezo, or known as Mabeke. I was not in a position to affirm who I was, because I was an African boy in a white space,” he explained. “I had to assimilate or suffer the consequences for being different.”

In spite of these challenges, Mabece passed matric well enough to gain entry to university, and was an avid debater, athlete and rugby player at both primary and high school.

“I became house captain, school captain, athletics captain and more. My brother, Loyiso, became headboy – marking a historic moment in the 130 year history of Selborne College. This after our older, late brother Luvuyo made history in 1998 by starting for the school’s first XV rugby team in the number 12 jersey.”

When he finished his schooling, Mabece enrolled at Fort Hare University to complete an LLB (Bachelor of Laws) degree.

“I am proud of where I come from. I am proud of what it took my family to get me there. I am proud of the wonderful chance I was offered to attend Selborne Primary and College schools, and I am super proud to have gone through that system and emerge from it with many wonderful accolades,” he said.

“But my story is neither unique nor particularly special – many of my country men and women have gone through this system and walked a similar path of excellence and achievement. Many of those people are at this university, in this room.”

In January 2009, after finishing his degree at Fort Hare, Mabece took on an internship at the SABC. But after a month, and a meagre salary of R3 000, he registered at Maties for an LLM in International Trade Law degree at the Law Faculty, which he commenced in February 2009.

A week after resigning from the SABC, he was in Stellenbosch and had moved into the empty Brackenfell home of his brother. But, on his first day of traveling from the house to SU, Mabece got a rude awakening. Public transport in the Western Cape would not get him to university on time as his commute would involve an hour’s walk to the nearest train station, another hour to get to Stellenbosch if the trains were running on time, 30 minutes to get to his lecture hall on the university campus from Stellenbosch station and on top of that, the transport costs would require money he did not have.

“After having to stand on the side of the road, with a Maties sign in my hand, hitchhiking for a lift to university, I decided to stay at home the next day. A day later, I returned and a fellow student from Zimbabwe welcomed me into his apartment and let me stay there for the night.”

The day after, he went to the postgraduate division’s Ms Schwartz, and pleaded his case. By the end of the day, the faculty had found money to tie him over and deposited it into his bank account to help with his living expenses. Soon after, he was accepted into Huis de Villiers residence and later, through his interest as a rugby referee, many other doors opened for Mabece.

“That was the end of my trials and the start of the good life in Matieland. So much so that I only graduated eight years later,” he said jokingly and laughed. “In reality, I wasn’t ready for that LLM and that is a critical lesson I learned from that.”

Irrespective, he completed it. A year before (May 2016) Mabece acquired the General Manager Programme certificate at the IEDC-Bled School of Management in Slovenia followed by a short course in Competition Law at the University of Cape Town.

In 2017, he took another risk. After reading about the LLM in Government Procurement Law at George Washington University (GWU) in the United States, he applied knowing full well he did not have the R750 000 he would need for his tuition and to cover basic living expenses in Washington.

Through his tenacity, Mabece secured full funding through a scholarship from GWU, that was augmented by his salary from his employer, who granted him 10-months leave to complete the degree.

“I gave myself a chance,” he repeated.

“I know that I have been incredibly fortunate, a lot of what has happened in my life is simply playing out to a script that was written long before I was born. When I was at SU, I was not ready to do a Masters, and it is okay to not be ready.”

Touching on another tip, he encouraged the students to not see delays as opportunities that are being denied.

“Somewhere out there, there is a bus waiting to dock at your station.”

In encouraging the students to be the generation who strives to be better than the generation that preceded them, not only for themselves, but also for those that will follow, Mabece continued: “Evolution demands that of you and our environment demands that of you. When I look around this room and feel the energy here, I have absolutely no reservation in thinking that this university is in great hands and our country will be led by responsible citizens.”

“The one thing I want to leave you with, if nothing else – believe in your madness, and give yourself a chance.”

Photo: Law Faculty alumnus, lawyer and SAFM presenter Songezo Mabece (far right) was the guest speaker at the second Careers Café. With Songezo are the students who won a dinner with him after attending the event as well as Marvin Koopman (third from the left), Alumni Relations Coordinator in the Alumni Relations division. From the left the students are Takudzwa Masunda, Motsoari Nthunya, Noku Katom, and Olona Ndzuzo. (Henk Oets)

From Stellenbosch to Kansas City

COVID-19: We’re in this together