Michael Allcock (5) is in the home straight of walking 50 km in support of Stellenbosch University’s #Train4Fees campaign. In fact, the campaign’s youngest fundraiser might even add a few kilometres to his goal now that the campaign’s end date has been extended to 31 August.

Launched on 1 June 2020 by Maties Sport and the Development and Alumni Relations Division (DAR), the campaign aims to help student athletes who have lost financial backing due to the impact of #COVID_19.

According to his mom, Candice Egan, the preschooler’s age – five – played a role in the decision to set targets of 50km and R5000.

Egan, who works in the Development and Alumni Relations Division, describes Michael as a very curious, very energetic boy who is interested in what goes on around him.

When he heard her discussing the #Train4Fees campaign, he decided that he “also wanted to play”.

“I thought it might be a good way of getting rid of some excess energy, and all for a good cause,” says Egan.

Michael wears a fitness tracker for their walks through their neighbourhood as he likes to take different routes.

Although he doesn’t completely grasp the #Train4Fees concept, Michael – who attends Barkly House Pre-Primary School in Kenilworth when there isn’t a pandemic – has a vague understanding that what he does will help “big kids go to school”.

Egan would like her children to learn the importance of sharing and develop empathy for people who are less fortunate. As they grow older, they will hopefully realise that anyone can make a difference by doing the little that they can, she adds.

With the extended end date, the campaign now has a new fundraising target of R2 million.

“We currently have over 300 student athletes who have applied for financial assistance and we would ideally want to help all of them,” says Hans Scriba, Fundraising Manager.

So how can YOU get involved?

You can sponsor any of the fundraisers on the Maties GivenGain platform in your chosen sport – rugby, soccer, cricket, netball and hockey – or support other sporting codes on the Maties Sport Page – or you can sign up to become a fundraiser for #Train4Fees, by either running, cycling, skateboarding or power walking yourself … whatever fitness training you enjoy. 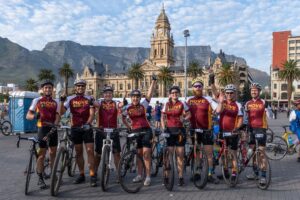 All alumni events cancelled or postponed due to COVID-19 pandemic